Indigenous Latin America Saluting the Argentine Flag. This is a visual work of art in commemoration of the Bicentennial of the Independence of the Argentine Republic. This event was held in the city of Tucuman, Argentina in September 2016.The Bicentennial theme developed in this art work has a positive and luminous perspective...

​​PUBLICATION OF 'PASSION, AGONY, MARTYRDOM AND SANCTIFICATION OF MONSIGNOR ROMERO' AND THE 'CANTATA TO SAINT ROMERO OF AMERICA'

​​WORLD PREMIERE OF DIGITAL VISUAL ARTWORK AND POETRY ABOUT SAN ROMERO IN ITALY
On March 23 and 24, 2019 'Passion, Agony, Martyrdom and Sanctification of Monsignor Romero' was presented in the cities of Chiavari and Rapallo in the Ligurian region of Northern Italy. This work is composed of 44 digital artworks by visual artist Alberto Cerritos and poetry in the form of a Cantata to Saint Romero of America by Mexican poet Benito Balam... 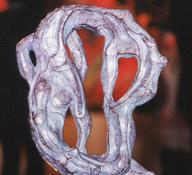 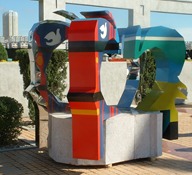 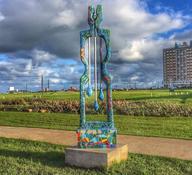 ​​​​​​​​Alberto Cerritos was born in San Salvador, El Salvador. He became a naturalized Canadian Citizen in 1992. He graduated from the National School of Fine Arts of El Salvador with a Major in Painting in 1967, and from the National Academy of Sculpture Uquxkah in 1970.  His work has been presented in group and solo shows in: El Salvador, Guatemala, Sweden, Russia, Ghana, Ivory Coast, Nigeria, Cameroon, Senegal, Mexico, USA, Canada, Spain, Argentina, Cuba, China, South Africa, Bolivia and Italy.

His small bronze sculptures maintain a direct relationship with his stone monuments through their unity of space and form. From his small drawings to his large canvasses and murals, his work is characterized by a strong and personal symbolism related to contemporary language. Since 1995, he has been dedicated to developing Digital Art as Public Art, and to the research and development of an Aesthetics for the Third Millennium and Complex Art.